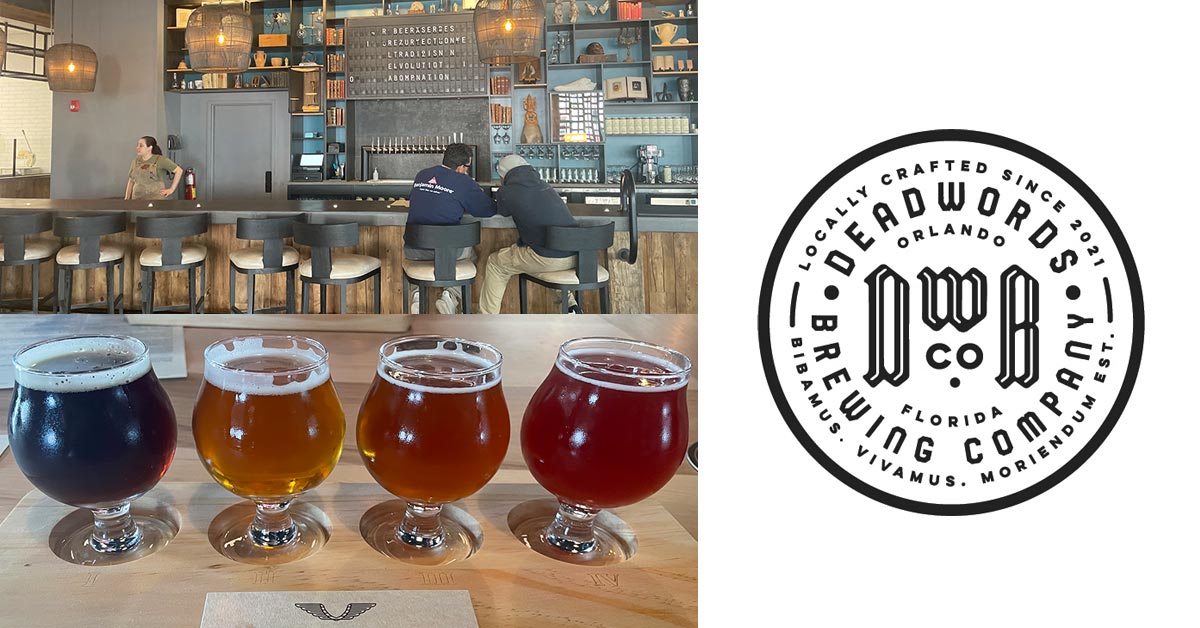 The newest brewery in the area (as of this writing) is Deadwords Brewing in Orlando. It had its soft opening in December 2021 and celebrated its official grand opening during the last weekend of January 2022. And it’s already a really exciting addition to the Central Florida craft beer scene.

The brewery and taproom is located on Orange Blossom Trail in the Parramore neighborhood, about 4 blocks from Exploria Stadium and 6 blocks from Camping World Stadium. The décor is unique and intriguing, and so is the beverage selection. Conveniently, there’s also food made on site. But more on all this below.

A number of the beers are available to go in cans, and you can get crowlers of many of the brews on tap. If you’re a craft beer enthusiast, we highly recommend a visit to Deadwords Brewing in Orlando as soon as possible. Especially if you get excited to try beers you’ve never had.

Deadwords offers a number of familiar beer styles, but also focuses on introducing patrons to beers they’ve likely never tried before. These include old styles—even ancient—and experimental brews. In fact, the brewery’s name is a reference to ancient beer recipes recorded in dead languages.

The beer menu is divided into four categories: Resurrection, Tradition, Evolution, and Abomination.

Resurrection is for very old beers that aren’t really brewed anywhere anymore. We tried the three they had available and liked them all a lot. One, called Kero, is the brewery’s take on an ancient Peruvian chicha (an alcoholic beverage traditionally made from fermented corn). It’s light, crisp, refreshing, and has a nice, not-overpowering clove flavor coming through. The one called Seven Cups is an ancient Finnish style made in a clay amphora (a large urn used by the ancient Greeks and Romans). It has a nutty, herbal flavor with a balance of sweetness and sourness, and it’s pleasant drinking with the excitement of trying something new.

Tradition is for classic styles, including some more historic versions of familiar beers, like Placeholder, a pre-Prohibition-style lager. Highlights in this category included a particularly potent, piney, hoppy Pacific Northwest-style IPA called Timberline, and an exceptionally smooth, creamy nitro Irish-style stout called Ferrum, which is quite dark and well-bodied, but much mellower and less bitter than you’d expect from looking at it.

Evolution is for currently trending and newer beer styles. We enjoyed them all, particularly Sangriale, a sangria-inspired fruited sour. It’s significantly sweetened, so it’s easier drinking than typical sours. If you’re a fan of the sour beers at Ellipsis Brewing—where they also usually heavily sweeten their sours—you’ll like this one. But if you want a more straight-up sour experience, Deadword’s imperial golden sour God Complex will be right up your alley.

Abomination is for experimental and “over-the-top” beers. We caught the first tapping of their first offering in this category during the grand opening weekend. It’s an imperial Black Forest stout with a hefty alcohol content and hefty flavor. It’s so bold, it lives up to the “over-the-top” descriptor. Flavorful and different, but we thought one 5-ounce glass of this will certainly suffice for most people.

When you walk in, you can’t miss the large, beautiful pizza oven in the open kitchen off to the side of the bar. Deadwords offers a few appetizers and shareable platters, including pork belly poutine, a charcuterie platter, a crudités board, and more.

The food menu also includes four pizzas, given the same names as the beer categories (Resurrection, Tradition, Evolution, and Abomination). And, like the beers, the pizzas reflect the names too.

We’ve tried Tradition, a Margherita pizza; Evolution, which has sausage, goat cheese, and caramelized onion; and Abomination, a Cuban sandwich-inspired pizza with prosciutto, sausage, pickled cucumber, Swiss cheese, and pale ale mustard. They were all fresh and delicious, but Evolution and Abomination were more exciting than Tradition—as might be expected. We were intrigued but a little skeptical about Abomination, but it worked surprisingly well, and the mustard is quite tasty.

These offerings make Deadwords Brewing in Orlando a great spot to have lunch or dinner while you’re drinking.

As far as the décor and atmosphere go, Deadwords is a strikingly unique, well-designed establishment. Like so many breweries, it’s in an industrial space, but it feels much warmer and more interesting than most, and it has a distinctly historical feel that perfectly plays on the brand’s theme.

The wall behind the bar is beautifully decorated with old books, clay pots, sculptures, and other miscellaneous paraphernalia that imparts literary and archaeological vibes. And then there’s a large flip board that rotates through fun historical facts about beer and some other information. It’s interesting, and it’s mesmerizing to watch—especially after a few drinks.

And the flip board is the only “screen” to watch. We love that there are no TVs in Deadwords. It’s so rare these days. They obviously realized that televisions would completely kill the feel they were going for. This is a place for conversations—not football games.

The large, communal tables facilitate this as well. Over the course of several visits, we had multiple conversations with a few groups of strangers seated next to us.

There’s a considerable amount of outdoor seating on the covered patio out front, too. Also, there’s a full view of the brewing facility behind glass walls and doors, with their clay amphora given prime positioning right up front, centered behind the glass doors.

Overall, this is probably the most enjoyable environment to drink in of all the Central Florida breweries. Combined with the quality of the beers, the ability to sample unfamiliar and ancient styles, easy access to good food, and the very friendly service, Deadwords Brewing is an enthusiastically recommended Orlando brewery to visit.

So do we! Don't miss any of our original content about awesome brands and things to do in the city! Subscribe to get it all in a convenient monthly email.