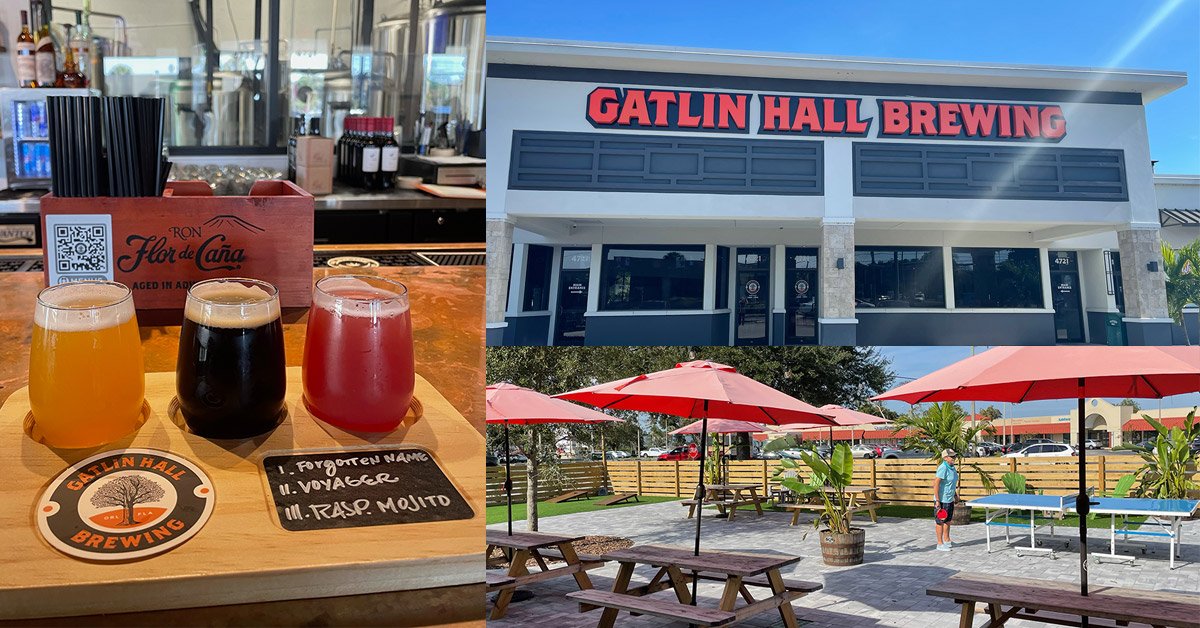 Having opened back at the end of August 2021, Gatlin Hall Brewing in Orlando is one of the newest additions to the Central Florida brewery scene. It’s in the Edgewood area just south of SoDo, in a shopping center by the intersection of South Orange Ave. and Gatlin Ave.

This is a particularly fun brewery to visit. Not only does it have a selection of house-brewed beers, but it also has a full bar. That means it’s an ideal place for craft beer lovers to drink with those friends, family, and colleagues who don’t like beer… yeah, we all have them. Plus, there are some excellent food options and a cool patio and yard. But more on all this below.

If you haven’t made it there yet, put Gatlin Hall Brewing in Orlando on your list of breweries to visit.

Gatlin Hall Brewing usually has about 10 of its own beers on tap, and usually one or two guest taps (on our most recent visit, there was a guest beer from Ellipsis Brewing, which is always a nice thing to find!). They don’t seem to have settled on a core lineup of beers yet, as the menu selection change regularly.

One beer currently on the menu as of this writing has been around since the beginning, or close to it, at least. It’s a Hefeweizen, a German-style wheat beer, called Sun Glitch. It’s a tasty, refreshing option and a good pick if you enjoy wheat beers. There’s also a pleasant hazy IPA called Ghost Dog that’s been around for a long time, and it’s identified as their “house hazy pale ale” on the menu.

You’ll always find a few IPAs and a couple of lager styles, and there’s always one or two porters and/or stouts and at least one sour. There’s a porter called Voyager on the menu as of this writing, and it’s smooth drinking for a porter, with a deep, rich flavor.

And, as previously mentioned, Gatlin Hall Brewing also has a full bar, so there are wines and liquors aplenty for any guests looking to imbibe something besides beer. It’s a rarity that a brewery has a full bar. We can’t think of another one in Central Florida that does at the moment.

The place is called “Gatlin Hall,” and it is indeed similar to a food hall. There are three food stalls inside the brewery:

We can enthusiastically recommend the food at all three of these places. We’re particularly partial to poke bowls from Da Kine, as everything is always incredibly fresh and the bowls are generous and well designed. But if you don’t want one of their signature bowls, you can build your own. And we’ll also call out the cheesy garlic sticks at Frenchy’s; you should definitely get an order.

Everything here seems new and clean, largely because it’s all pretty new, probably. Gatlin Hall Brewing has a large indoor seating area along with the bar. The three food stalls are off to one side. You can get table service for drinks, but you do have to get up and amble over to the food stalls yourself when you get hungry. There are lots of TVs showing various sports games, and there can be a sports bar feel to the place, especially on the weekends, when it can get pretty crowded.

If you prefer fresh air, there’s also a large outdoor seating area with picnic benches, complete with a window for ordering drinks from the bar. There’s a covered patio providing plenty of shady places to sit (a fairly new, very welcome addition; previously there were only umbrellas over the tables).

But wait, there’s more outside! Namely, a ping-pong table, a putting green, and some cornhole sets. So, you can play around a bit while you’re drinking. And it’s not uncommon to see kids enjoying the games, along with some pizza or burgers and fries, while their parents have a beer or two.

Monday through Sunday 11 am to 11pm