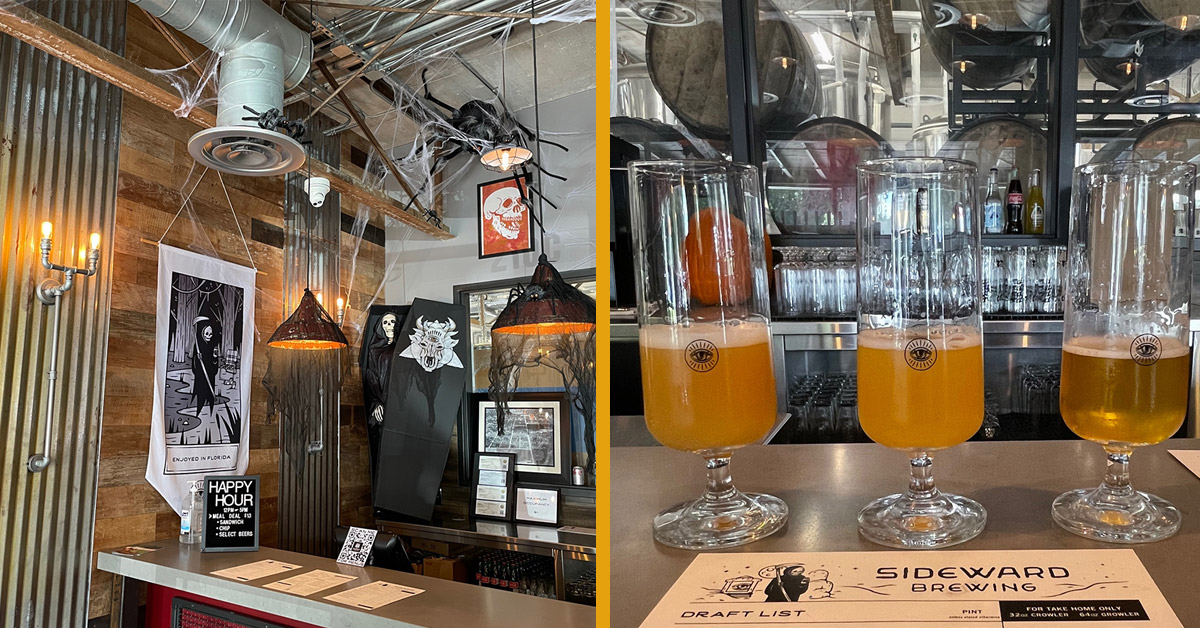 Having opened in 2019, Sideward Brewing in Orlando is one of the younger Central Florida breweries. But it wasted no time in establishing itself as one of the region’s leading breweries. If you’re a fan of craft beer, we highly recommend a visit to Sideward, which is centrally located in the Milk District near the intersection of Bumby Ave. and Robinson St.

You can also grab canned beers to go, or get a crowler or two filled. And, happily, Sideward Brewing has embraced the environmentally friendly practice of using recyclable and biodegradable cardboard rings to bind their four and six packs, rather than plastic.

Also of note: This is also one of the few Orlando breweries that has its own kitchen.

Sideward Brewing has about 20 taps of its own beers. Most of the taps are rotating, but there are several beers that seem to always be available. For example, there’s the Punks in the Waiting Room lager, which is light, crisp, easy drinking.

But one of the standout beverages here is Moon Boots, which is identified as the brewery’s flagship IPA. If you’re an IPA fan, this is one of Orlando’s great ones that are regularly available. There’s also a very tasty New Zealand-style IPA on the menu as of this writing called Brain Radio. If you’re not familiar with New Zealand IPAs, stay tuned, they’re probably about to start popping up all over the place. In fact, they were just added into the Brewers Association Style Guidelines in early 2021.

And then there’s Friends and Enemies (another one that stays put on the menu—thankfully). It’s a delicious coffee milk stout brewed with cocoa nibs and vanilla. The chocolate flavor shines, and this beer is rich, creamy, smooth, and mildly sweet. It drinks like a dessert—but definitely not one that’s too sweet; it’s even less bitter and a little bit lighter than many other coffee stouts. All in all, it’s an exceptional beer.

As of this writing, there’s a wheat beer brewed with Florida citrus and Florida cane sugar on the menu called People of the Sun. It’s refreshing and has nice depth of flavor and good body, and is an enjoyable pick. There’s also an experimental “cold IPA” called Dome. Ales are fermented at warmer temperatures than lagers, but this one is fermented at lower lager temperatures to give it the heartier flavor of an ale with the lighter body of a lager. The result is a fairly mild, crisp beer, and it’s something different to try.

Sideward has a few large tables inside, but most of the seating is on the covered patio. There are overhead fans working hard, and they’re effective on warmer days. At busier times, the brewery also sets up some tables with umbrellas in part of the parking lot.

The brewery also has a kitchen that turns out great eats. If you’re just looking for something to snack on, you can’t beat the warm soft pretzels served with a couple of cheese dips and stone ground mustard. The hummus with pita and veggies is nice, too. And if you need something a bit more substantial, there’s a good selection of sandwiches to choose from. Upgrade your side from the chips to Gram’s potato salad.