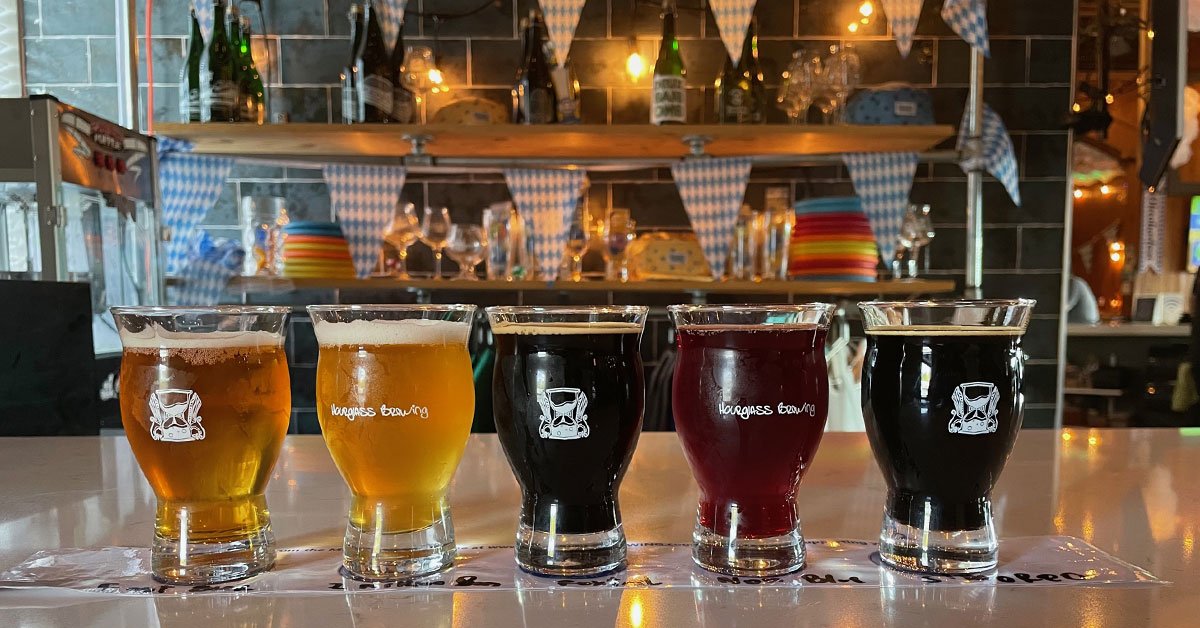 One of the best breweries in Central Florida is undoubtedly Hourglass Brewing in Longwood and Orlando. With more than 40 taps of their own brews, it’s an amazing place for craft beer enthusiasts to go and try a whole bunch of different brews. There’s always a diverse lineup of beverages, and usually a rare or unfamiliar style or two to pique your curiosity. They even like to throw in the odd historical recreation.

The brewing facility, original taproom, and expanded sub-brand Sourglass (dedicated to sour beers) are located in Longwood, Florida. There’s also a second location—taproom only—in the relatively new Hourglass District in Orlando (it’s named for a nearby lake, not the brewery).

Hourglass Brewing is a great place to go and have a few beers. But, again, it’s also a great place for the sheer joy of sampling lots of different beer styles and variations. Their flights are a generous five beers, rather than the usual four, facilitating this approach.

If you’re into sour, farmhouse, and wild beers, you’ll find a bigger selection at Hourglass Brewing than just about anywhere else. But there are always all the usual suspects, like IPAs, stouts and porters, various types of lagers, and more. Plus a few types you might not be familiar with.

The taps rotate, and there’s no guarantee that any particular beer will always be available. If you catch 2 Million Bees and Some Hops on the menu, this New England double IPA is highly recommended. It’s smooth drinking with all the hoppiness you want, balanced with a subtle sweetness, and a hearty body and texture.

Another favorite that’s often available is the Foxtail Double Coffee Stout, made with coffee from local purveyor Foxtail Coffee Co. It’s a formidable brew with 11% ABV, made for slow sipping, with a gentle bitterness, richness, and great depth of flavor.

If you want a sour beer, check out any sours from their cobbler line. The NOM NOM Blueberry Cobbler, for example, is a winner.

As of this writing, Hourglass Brewing has some seasonal Oktoberfest offerings. There’s a festbier style called Festbier (so, no confusion there) on the menu now that you should try. It’s a medium-bodied German-style lager that’s crisp, bright, and delicious.

The spacious Longwood taproom has 240 seats and nerd-inspired décor. There are video games and board games, as well as patio seating out front. It opens directly into Wako Taco, and they’ll bring your tacos to your table in the taproom. Or, order from Papa Bees a few doors down in the same plaza if you’re in the mood for wings instead of Mexican food.

The Orlando taproom is a bit smaller, but still a good size. It has nice patio seating out front and along the side. There are a number of food options. Sometimes, you’ll catch a food truck or a ramen pop-up right outside. But there’s always pizza from F&D Woodfired Italian Kitchen next door, tasty Mexican from Cilantro’s Taqueria, and a few places across the street in the Hourglass Social House.

Events at Hourglass Brewing in Longwood and Orlando

Both Hourglass Brewing locations are amply sized for business and personal private events. There’s a great beer selection to please any palate, and good food options right there, too. If you’re interested in having an event at Hourglass Brewing, get in touch with the facility.