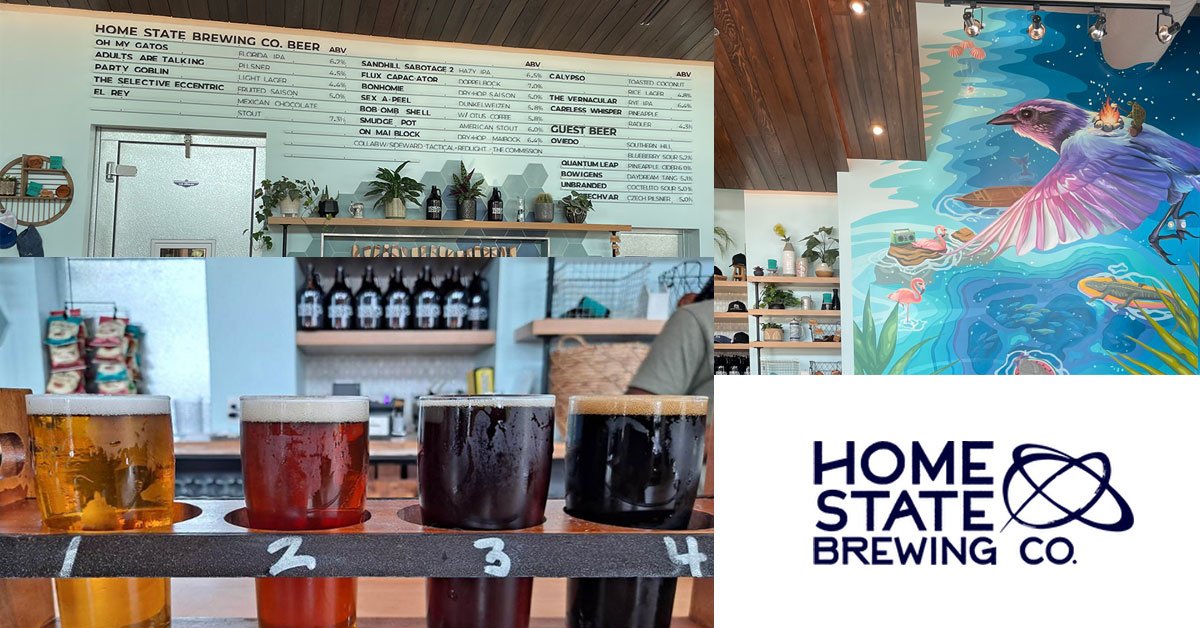 We recently paid a couple of visits to one of the newer breweries in the Orlando metro area, Home State Brewing in Winter Garden. And we think it’s an exciting addition to the burgeoning Central Florida craft beer scene.

As they note on their website, they strive to create an atmosphere where everyone feels at home… a “home state of mind.” Hence the name.

And they’re successful at it. The taproom is welcoming and comfortable, and the service quite friendly and informed. Plus the beers are really good, too.

The brewery is located in the southernmost reaches of Winter Garden, a ways down 429 from Winter Garden Village in the Hamlin Cove shopping center. It’s a great option on the opposite side of town from Crooked Can Brewing Company in Plant Street Market in downtown Winter Garden. We encourage you to visit soon!

Home State Brewing in Winter Garden has about 15 of their own beers on tap, plus a handful of intriguing guest taps. There are light, refreshing, easy-drinking options like the pilsner called Adults Are Talking with a 4.5% ABV, and there are heavy-hitting options like El Rey, a fantastically rich and delicious Mexican chocolate stout brewed with cinnamon, cacao nibs, and guajillo and morita chiles at 7.3% ABV. Definitely don’t miss out on the latter if it’s on tap when you go.

A few others we really enjoyed include the doppelbock Flux Capac-ator, a straight dunkelweizen called Sex A-Peel and another called Bob-omb Shell made with coffee from local Winter Garden roaster Otus Coffee Co., and a maibock called On Mai Block. They seem to have a particular interest in German styles, and they do them well.

We also tried an interesting beverage we weren’t familiar with: a radler, which is a mix of a lager and fruit juices, similar to a shandy. This one, called Careless Whisper, is a pineapple radler. It’s very tasty and refreshing, and could be an excellent option if you’re there with someone who isn’t a big beer drinker.

There were a few IPAs on the menu, but none of them jumped out at us. Just based on the few we tried at our most recent visit, IPAs might not be their strength. But none of them were bad, and the Sandhill Sabotage 2 hazy IPA is a fine choice if you want something hoppy and fruity.

Just to make you aware, the aforementioned local coffee roaster Otus Coffee Co. is on site serving coffee on weekend mornings and early afternoons. You can get it on Fridays from 7 am to 2 pm and on Saturdays and Sundays from 8 am to 2 pm. Note that there’s no beer available before 11 am on any of these days, though.

Home State Brewing in Winter Garden is an inviting spot. The inside of the taproom has a good amount of bar and table seating, as well as some couches. It’s a pleasant place to drink, but there’s also an expansive outdoor space. There’s a spacious covered patio with an outdoor bar (that wasn’t in use on either of our visits, which weren’t at peak times), as well as a large uncovered yard with a lot of additional seating.

They also have live music on Friday evenings and on Saturdays during the day and at night. As for food… There’s at least one food truck parked outside, and there are a number of restaurants all around in the shopping center; you’re welcome to eat any of it at the brewery. Home State’s website mentions its own kitchen not being open yet, so presumably they’ll offer house-made food at some point (and may then discourage outside food).