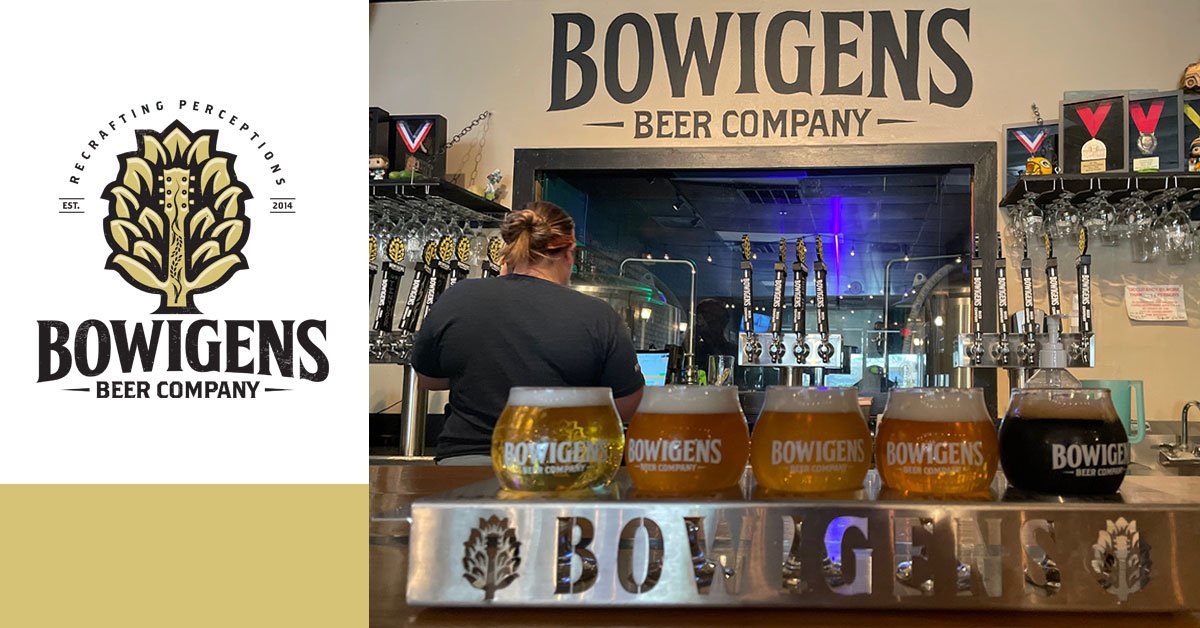 Bowigens Beer Company in Casselberry and Orlando is one of the most consistently high-quality breweries in Central Florida. The brewing facility and original taproom is located in a small strip mall in Casselberry, where it opened in 2015. But the company also recently opened a second taproom-only location in Orlando’s Avalon Park, in the new food hall Marketplace at Avalon.

The name—which tends to puzzle people—is a mashup of the two owners’ last names; they’re Bobby Bowen and Kevin Wigen. We enthusiastically recommend that every craft beer fan in the area get well acquainted with Bowigens.

At Bowigens Beer Company in Casselberry, you’ll typically find somewhere around 18 house-brewed beers on tap. The second location in Orlando has a slightly smaller selection.

You can’t help but notice as you watch the beers pour that their colors are always perfect. And you see such well-developed heads. They’re good signs that you’re getting good stuff before it even makes its way over to you.

And then you smell it and taste it, confirming you initial impression. Bowigen’s beers consistently deliver great taste and an exceptional body and mouthfeel. Sure, you might try a beer you don’t like—here or anywhere—but you can always be confident that it’s just a matter of your personal taste; every beer is well crafted and of high quality.

There’s always a mix of their core beers and rotating taps. As for a few you can count on finding… The 7 Layer Stout is a rich, complex, delicious brew everyone needs to try. If you like a crisp, citrusy pale ale, don’t miss Bow 9. For a hoppier experience, order the TrHOPical Fusion. For those who prefer lagers, the 407 Pils pilsner will undoubtedly satisfy.

Recently, there’s been a refreshing wheat beer called Daydream Tangerine on the menu that’s easy to recommend—even if you don’t gravitate toward wheats. And, on our last visit, they were serving several of their Theogenes barleywines from the past few years. Some are straightforward versions, while others are modified. While we’re not the biggest fans of barleywines in general, we’ll say that the extra-hoppy Theogenes was surprisingly tasty.

Bowigens offers flights of five pours (as opposed to the more common four glasses). It’s a perfect way to sample a variety of their brews, which you should do.

Bowigens Beer Company in Casselberry is a relatively small taproom, but it’s cozy, comfortable, and clean. There’s also some patio seating out front. The servers are incredibly friendly and enthusiastic, and they’re knowledgeable about beer in general and the specific products they’re serving. That’s always nice to find at a brewery. They don’t sell food, but there are a few other places to eat in the same plaza.

As mentioned above, the Orlando taproom in Avalon Park is part of a food hall. The bar is straddled by both indoor and outdoor seating, and there’s lots of covered patio seating outside the establishment. As you would expect from a food hall, there are a bunch of places to get all sorts of food. You might catch some live music there too in the evening. It’s a fun spot, though it can get pretty crowded.